Well, that was nerve-wracking.

The winning team would get $40,000. Not exactly chickenfeed.

I was nervous for hometown chef Evelyn Garcia, who was tapped by her three teammates to lead in the kitchen. She’s been doing so well, but the thing about these team challenges is that contestants tend to rise and fall together. If a colleague messes up, somebody on your team is getting sent home, and — if you’re the one in charge — it might be you.

So there was that hanging over me. Plus after a long career of handicapping restaurants, I knew only too well the many, many pitfalls the teams would encounter along the way — particularly in terms of timing. From the cooking line to service across multiple courses, every move counts.

I felt as anxious as a cat in a room full of rocking chairs as the teams scrambled to come up with ideas and shop for their concepts. That feeling stayed with me until the bitter end. I had to laugh at myself, because for someone who started the season with no investment in Top Chef, I sure am taking it personally.

At first blush, the Southeast Asian concept proposed by Jackson — and agreed on by his teammates Jae, Evelyn and Luke — sounded more appealing than Nick, Buddha, Damarr and Ashleigh’s tribute to Southern matriarchs.

I was convinced that Evelyn and Jae would fly high in that context, which is Evelyn’s strong suit; and I was jazzed to hear Evelyn and Jae hit on a Gulf seafood slant. Jackson’s punning No Nem name for the restaurant made me LOL. I’ve been nonplussed by Noma alumnus Luke’s unsteady progress through the season, but I figured if worst came to worst, he’d finally get eliminated.

Handicapping the chances of Matriarc (more wordplay!) seemed like a harder call. Nick and Damarr have been steady competitors. Buddha’s rocky start has progressed to consistent displays of technical brilliance — and a slightly prickly hauteur that caused Jae to confide to her teammates that she was glad not to be on his team.

As for Ashleigh, I’m always worried for her and surprised, given her reputation, at her many missteps. So when Ashleigh was picked by Nick, Damarr and Buddha to head up the effort — I mean, they couldn’t very well open a restaurant called Matriarc with a guy in charge — I anticipated trouble ahead.

I was struck that both teams went with women for the executive chef role. Buddha and Jackson quickly volunteered to do one course each (out of five) while handling front-of-the-house duties. They’re both charming in their own way, so I could see that working out.

It was fun to see the menus coalescing, and to watch the chefs deferring to their teammates’ particular strengths. Ashley wanted to do one of her raw beef dishes, but gave it up when she realized how badly Nick wanted to do his steak-and-oxtail marmalade idea. That’s leadership.

I worried a bit when Jackson proposed serving No Nem’s food family style. The menu that was shaping up didn’t seem to lend itself particularly well to that style of service. I wondered if Ashleigh would regret letting Buddha badger her into upgrading her green salad with buttermilk cheese pearls — in honor of her grandmother Pearl — into a fancier salmon tartare affair.

I sweated when Damarr encountered a last-minute oven temperature glitch while prepping his famous carrot cake — another mom tribute. My eyebrows lifted as Evelyn, instructing Luke on a choo chee curry formula, seemed to utter the phrase “four cups of palm sugar.” I don’t care how much you’re making, or how much tamarind paste and lemongrass you add, that’s gonna end up too sweet. (Which was easy for me to say from the comfort of my viewing chair.)

Jackson still couldn’t taste or smell post-COVID, and he laughed so hard when Jae told him his dessert needed “more sweetness,” that I thought he might finally confess his sensory deficit to his teammates. But the moment passed.

And then it was showtime. Dramatically so, as guests descended the crisscrossing stairwells that make the vaulting atrium at Post Houston look like a futuristic sculpture. I tried to spot a familiar face, but the only people I thought I recognized was street artist Gonzo247, aka Mario Figueroa, in his trademark black cowboy hat, seated at No Nem’a VIP counter; and later, pastry chef Becky Masson, who was ID’d as a past participant in Top Chef Just Desserts.

At ground level, the hall was divided in two by a wall. On one side lay No Nem, its square tables set with vivid tropical arrangements and philodendron leaves, the chairs backed in a faux bamboo pattern.

On the other side lay Matriarc, all round tables, puddled white linens, white flower arrangements and bentwood chairs. Buddha had instructed the evening’s staff to make sure each seat was turned toward the judges’ counter and the open kitchen — one of his many smart moves that night.

I always speculate that the first tasting menu the judges sample has a built-in advantage, when palates and appetites are keenest and the evening is fresh. But the judges went so bonkers over four out of five Matriarc dishes that I doubt that any edge they had mattered.

I would have loved to sample Buddha’s Parker House rolls with country ham butter, just one of the array of Southernesque snacks he had prepared. “Fantastic!” raved Tom, an expert in the form. All the while, Buddha glided about smoothly explicating each dish for the judges, pouring wine, dispensing welcomes. He seemed completely comfortable in the role — polished, verbal, meticulous.

Then came a woeful service gap as plating of Ashleigh’s salmon tartare course lagged and the judges fretted. “I have two little baby buttermilk pearls,” lamented Gail when her food finally arrived.

Then the judges basically lost it over Damarr’s tribute to his mom’s carrot cake, which he managed to rescue from its unevenly baked state via careful cutting. They could not shut up about the carrot caramel filling. Or the coconut /lime/ginger ice cream.

“This seems like a real restaurant that’s actually been open,” offered Tom as they finished up.

Uh-oh, I thought. Evelyn’s team had their work cut out for them.

It did not go smoothly. Evelyn and Luke had been back and forth about timing the fish, Luke balky at the idea of pre-cooking, Evelyn exasperated. “I’m trying to run a line and not lose my [expletive],” she told the camera.

Tom scoffed at the cheesiness of the “Welcome Judges” cards Jackson had set out on their table. There was grousing that nobody but a rent-a-server came by to instruct them on the intricacies of Evelyn’s opening pani puri course. Padma lamented the lack of liquid in the dish, observing that one measured the crispness against it.

Much was made of the “beautiful, sour, bright, spicy” sauce for Jae’s fish-wrapped summer rolls. Tom complained that Jackson was “interacting with every table really well, but it’s almost like he’s trying to avoid us.” Evelyn overheard, and deputized Jae to tell Jackson to engage with them.

“More?” asked Jackson. “Yes,” urged Jae, “you need to talk to them.” Jackson’s resolve not to treat the judges’ table any differently had backfired on him. The judges still had to prod him to explain the nem nuong lettuce wraps and how best to put the barbecue sausage rolls together.

Luke and Evelyn’s black cod choo chee curry also backfired: too sweet, as I feared. Jackson’s shortbread dessert, which earlier had defied forks and skidded off plates, had undergone a desperation pivot into finger food, and that didn’t ring the judges’ bells, either. “Doesn’t feel restaurant-y or buttoned up,” said Gail.

Tom objected that “the entire experience would have been better coursed out. The fish curry had nothing to do with the No Nem wraps.”

And so the die was cast. Ashleigh won the night. Jackson was sent home — but not before he finally, sensing his fate, disclosed his COVID-related sensory loss to his fellow competitors. They looked and sounded shocked.

Let Tom write the semi-encouraging epitaph for Evelyn and company’s effort: “You probably put together the best restaurant ever to lose restaurant wars.”

Sat Apr 23 , 2022
Image by Maitane Romagosa for Thrillist A new best fried chicken sandwich has been crowned. The onion rings to rule them all have been named. The finest fast food and fast casual cheeseburgers in all the land have been found. We present to you the winners of The Fasties, Thrillist’s […] 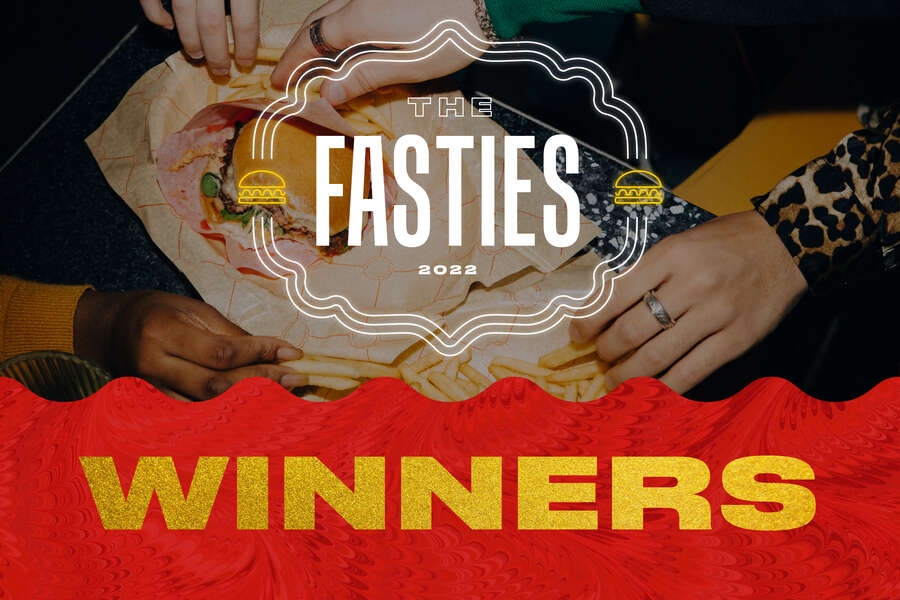