Roberto Hernandez Guerrero worked the line during what he calls the “golden age” of Andina, when future Paiche chef Jose Luis De Cossio was at the helm, and the once modestly sized Peruvian restaurant was growing to a 600-seat behemoth.

That could explain why he seems so calm working the domed oven at Reeva Cafe y Cocina a la Leña, the food truck he and wife Roseva Alcerro opened last month on Northeast Sandy Boulevard. Here on the gravel lot beside Blossom landscaping, Hernandez Guerrero lifts a margherita pizza so it gets bathed in the heat collected at the top of the Italian-built dome, drizzles on olive oil and a handful of ripped basil, then uses a metal peel to chuck a handful of sawdust into the flames, all while taking orders and pouring cafecitos, often by himself.

It’s early days at Reeva, but it would not be too bold to say that the pies coming from this former FedEx truck already rank among the best Neapolitan-style pizzas in Portland, joining the likes of Nostrana, Hapa Pizza in Beaverton, La Sorrentina in Vancouver and the nearby Pizzeria Otto, where he used to work and whose owner, Clark Hale, recommended I visit late last month. Yet as good as those traditional pies are, with bright tomato sauce and good olive oil mingling deliciously on thin-stretched, char-dappled dough, they’re not the main reason to visit Reeva.

That would be the pizzaleada, a Reeva original riffing on the Honduran baleada, with refried beans, four types of cheese and sour cream folded in quarters in the “portafoglio” (aka “wallet”) style popular as a street food in Naples. Hernandez Guerrero, who was inspired to create the pizza after trying a traditional baleada — basically a big bean and cheese taco on a flour tortilla — made by Alcerro’s mother, will suggest you add some chorizo or a few discs of sweet jalapeño for punch, and those aren’t bad ideas. But even in its more basic form, the combination of chewy dough, melted mozzarella, sour cream and perhaps some dripping yolk from a flash-cooked egg, is one of the tastiest things I’ve eaten this year.

Hernandez Guerrero hails from Querétaro state in North-Central Mexico and, since moving to the United States 20 years ago, has worked at several of Portland’s best-known restaurants, including Andina, Beast and, for the past three and a half years, Pizzeria Otto. His first specials at the cart have leaned into Peruvian ingredients, including a recent “Machu pizza” with a base of salsa Hauncaína, a spicy yellow-orange sauce typically made with blended chiles and cheese. Experiments with beef slow cooked in a hot box could soon inspire a pizza based on the quesabirria trend. We can’t wait to try it.

Right now, Reeva opens early five days a week for coffee and breakfast, including that pizzaleada, and is slowly adding Sunday brunch dishes, including baked chilaquiles, steak and eggs and huevos rotos, a mix of wood-fired potatoes, egg, arugula and fresh romesco sauce. Time will tell whether Portland embraces the morning menu — other restaurants have tried breakfast pizzas before — but with one person manning the oven, register and espresso machine solo, a few more ready-to-eat sandwiches or baked goods might not be a bad idea. A fresh-baked roll split in half, still steaming, and smeared with fresh romesco that Hernandez Guerrero sliced into small bites to share with customers on a recent visit could be a good place to start.

Going forward, Hernandez Guerrero and Alcerro plan to add picnic tables and some barrel tables to the lot, where they could even host wine tastings from the wonderful Mom & Pop Wine Shop just west on Sandy. Hours will likely stay in flux as Reeva figures out what exactly its Roseway neighborhood wants from a pizza truck, and new dishes — each with its own punny name — could appear week to week. Just don’t expect to see Hernandez Guerrero get flustered.

“I just have the mindset that I’ve got to be ready for whatever,” Hernandez Guerrero said. “I’ve worked in some of Portland’s busiest restaurants. I can handle pressure really well.”

Sun May 8 , 2022
Like many shoppers, I’ve noticed my grocery bill getting bigger each week: February food prices were 7.9% higher than they were a year ago, according to the U.S. Department of Agriculture’s Economic Research Service. To compensate for my family’s busy spring schedule, I’d also been turning to shortcuts like prepackaged […] 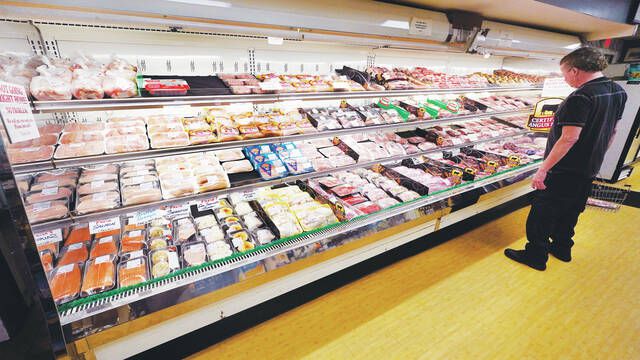