A surprise spring wind whips the flags over Oracle Stadium, the most recent name for the home of the San Francisco Giants, as the sun shines off the enormous barges in the bay. Since it broke ground in 1997, the stadium has been a haven for baseball fans, and has served millions of slices of pizza and Krazy Krab sandwiches.

This year it’s worth making a whole day of traveling to a game. Oracle Park has new food and drink to show off, with drink rails installed around the rim of the park and the occasional E40 cameo to tout. Plus there are high class rooftops and legendary pre-game hangouts to visit. Ferry Building empanada favorite El Porteno just opened a new location on 2nd Street, a block from the stadium, and the park has free games like Skee-Ball and batting cages for kids at the new Bullpen Ballpark on the ground floor.

No matter the reason for your visit, these 11 items are going to make going out to the ballgame for peanuts and crackerjacks seem like a distant memory.

Rimmed with Pop Rocks, this drink packs a heavy Tito’s vodka punch. It’s the best booze to drink beyond the expansive beer selection in the 415 Club (where local beer like Pliny the Younger starts at $9).

From Gilroy farms to your guts’ biodome, these dripping fries are an Oracle Park mainstay for a reason. They’re served neatly in plastic helmets or overflowing in little baskets, tumbling into the cardboard drink server that works as a tray.

With an impressive cauliflower crust and a cheesy umami boost, this excellent gluten-free option isn’t an item one would likely anticipate at a baseball stadium. But the Garden, an outdoor bar space near the Bullpen Ballpark and the 415 Club, features an edible garden and an all gluten-free menu.

To the true fans, this is probably not new information, but for the rest of us: Orlando Cepeda, a Giants hall of famer who hailed from the Caribbean Islands, was known as Cha Cha. His namesake bowl, a chicken and black bean medley adorned with pineapple slaw, is much heartier than one might think, and might be the best bang for your buck, pound for pound, at $15.50.

Lines stretch from the crab stand to the Peets’ Coffee across the way, with sandwiches squeezed against each other on the grill to meet the demand. One would be a fool to miss this sandwich, sporting Dungeness crab mixed with mayo between Boudin bread. According to the park’s Director of Operations for Bon Apetit Michael Bear, the stadium sells 2,500 of them each game day.

This North Beach classic just hits different in a ballpark, grease and all. Oracle Park just added a vegetarian slice to the menu for the first time, too.

Also from the Public House, these three tacos on flour or corn tortillas were a light and refreshing option — though the more indulgent patty melt and wings are tough to pass on. It might have been the cilantro cabbage slaw that sealed the deal.

This porchetta-stuffed sandwich topped with arugula is part of a new offering from the Oracle Park team, and worth checking out.

It’s old news to feign surprise when the plant-based version of a classic dish tastes just like the traditional meat-filled version. But this vegan cheesesteak, with a peppery bite and gooey cheese, stands out amongst the crowd of would-be replacements. The park’s It’s Impossible stand serves up all the classics — chicken nuggets, burgers, and chili — but vegan alternatives. Of note: the vegan chili was so popular they made it the only chili available in the park.

This dessert is probably the only vegan and gluten-free dessert in the ballpark. And while the Lumpia Company also serves their signature fried food, it’s the soft serve, which comes in pineapple or strawberry calamansi, is what makes vegans love the ballpark. By the way, business is run in part by famous Bay Area rapper E-40.

What makes Hartford unique? ‘The food,’ and now there’s the Hartford Taste Festival to prove it.

Wed May 4 , 2022
David Griggs of the MetroHartford Alliance said one of the easiest questions he’d ever been asked was what he likes most about Hartford. “The food,” Griggs said during a ceremony Wednesday to announce the inaugural Hartford Taste Festival that will be held at Constitution Plaza June 10 and 11. “The […] 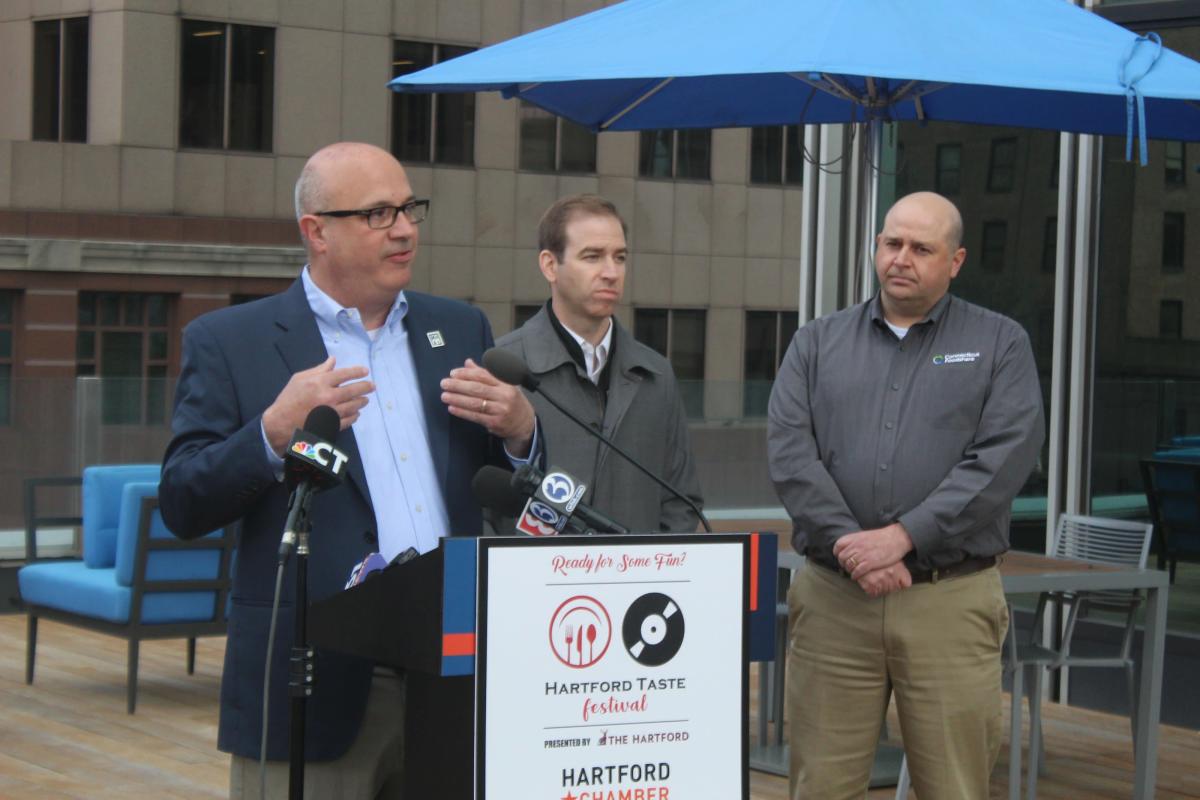